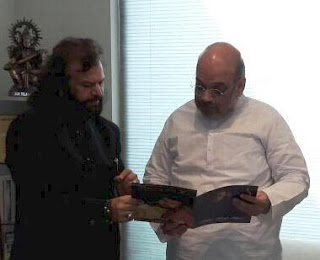 New Delhi: In a sudden political change which will be play crucial role for the BJP dreams in Punjab election, the noted Punjabi singer Hans Raj Hans joined BJP in the presence of party chief Amit Shah.

Hans said that he was influenced by the revolutionary decisions by PM Narendra Mod and so he decided the same.

According to Hans, India is emerging as a front runner on the world stage and it is matter of pride for every Indian.

Hadleft my family and home to serve the nation: PM Modi

It is noted that Hans was currently in the Congress and Akali Dal earlier. He belongs to a dalit community and certainly his joinig hands with BJP will be crucial for the coming election in the state.

Hans said that he was influenced by several "revolutionary decisions" taken by Prime Minister Narendra Modi and so he decided for the same. Accoding to him, decision of the PM Modi is in the interest of the country and its people.

Needless to say, his joining hands with BJP have provided better aspects for the party. SAD-BJP combine in Punjab is all set to fight tough war in the coming elecion from Congress and Arvind Kejriwal laid AAP.