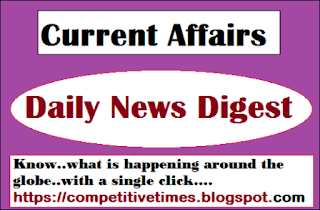 17 October 2018
Union Minister of Textiles, Smriti Zubin Irani, inaugurated the 6th India International Silk Fair (IISF) at Pragati Maidan in New Delhi.
India is the 2nd largest producer of silk after China and is emerging as a leading exporter.
16 October 2018
Teen Murti Estate, New Delhi will soon witness a  “Museum on Prime Ministers of India." Union Minister for Culture Dr. Mahesh and Minister for Housing and Urban Affairs Shri Hardeep Singh Puri laid the Foundation stone for the same.
41 teams of Central Pollution Control Board (CPCB) have been deployed in Delhi and NCR cities of Ghaziabad, NOIDA, Gurugram and Faridabad to monitor and supervise dust mitigation and other air pollution abatement measures to ensure effective compliance.
Delhi Metro Rail Corporation (DMRC) has added 906 new coaches out of this, 704 coaches have already been commissioned and remaining 206 are under commissioning stage.
15 October 2018
What is the name of the unique internet based mobile app which has been launched  by Election Commission of India which will be bemeficial for upcoming assembly polls-C-vigil
Government has set its target of reducing road accidents by 50 per cent by the year-2020.
To achieve its target, government has launched a training programme.
In which of the Insian city, an ‘Ex-servicemen Rally’ was organised by the Army-Khed (Pune)
In which of the city, the 46th edition of world’s largest IHGF-Delhi Fair in -Greater Noida
In which of the country, the 6th RCEP Inter-sessional Ministerial Meeting (IMM) was organised-in Singapore
11 October 2018
Name the State/UT for which home ministry has given an exemption to Sikh women from wearing protective headgear (helmet) while driving two wheelers- Chandigarh.
10 October 2018
Name of cyclonic storm which has been developed in Indian sub continent over the Bay of Bengal and the Arabian sea- TITLI and LUBAN
Name the Mobile Health app, which has been launched by Indian Air Force in keeping with the Prime Minister’s vision of ‘Digital India, Ayushman Bharat and Mission Indradhanush’ on
the occasion of 86th anniversary-MedWatch
09 October 2018
Name the country where Confederation of Indian Industry (CII)- EXIM Bank, Regional Conclave on India-West Africa Project Partnership is organised- Abuja, Nigeria
In which of the city, Prime Minister unveiled a plaque to mark the laying of Foundation Stone of the Rail Coach- Karkhana, Sonepat.
The four day long mega science expo, India International Science Festival (IISF) concluded in Lucknow which witnessed a footfall of more than 10 lakh people and more than 22 thousand registrations, the highest in its four year history making it the largest festival of its kind in- Asia.
08 October 2018
The Indian Air Force is celebrating its which of the anniversary on 08 Oct 2018- 86th Anniversary .
Andaman & Nicobar Command celebrated its which of the Raising Day today on  08 Oct 2018-18th
07 October 2018
International Conference on Women’s Health, Wellness and Empowerment organised in - Kanpur.
In which of the city the third edition of Japan-India Maritime Exercise (JIMEX) with the ships of Eastern Fleet of the Indian Navy (IN) commenced from 07 to 15 October 18- Visakhapatnam.
05 October 2018
India and Russia have  welcomed further efforts aimed at signing of agreements between Assam and Sakhalin, Haryana and Bashkortostan, Goa and Kaliningrad, Odisha and Irkutsk, Visakhapatnam and Vladivostok.
Name the country which is organising the 2nd Global Renewable Energy Investment Meeting and Expo, (REINVEST- 2018)-India
In which of the city the 4th India International Science Festival-2018 (IISF-2018) to be organise- Lucknow
04 October 2018
In which of the city of Mabhya Pradesh, the National Institute of Mental Health Rehabilitation is  to be set up- Sehore
Union Cabinet has approves Metro Rail connectivity in which ofvthw twi cities in Madhya Pradesh- Indore and Bhopal
03 October 2018
-------------------
In which of the city, The Conference on 'Women in Detention and Access to Justice' was organise- Shimla(October 4-5, 2018)
02 October 2018
-------------------
Name the pweson who has been appointed as  the Deputy Chief of the Air Staff-Air Marshal VR Chaudhari AVSM VM
In which of the country the Brazil, India and S. Africa multi Exercise IBSAMAR-VI
a joint Multi – National Exercise  was organised recently-South Africa (Simons Town)
Name the person who has been taken over as the Director General Air (OPS)- Air Marshal Amit Dev VSM
In which of the city  Prime Minister Narendra Modi inaugurated the first Assembly of the International Solar Alliance-New Delhi

To provide the high quality of higher education in the country, in which ofbthe city the State Education Ministers meeting was organised - Haridwar

Name the Uzbekistan President  who was on the  two-day visit to India-Shavkat Mirziyoyev
In a bid to boost mobile handset production in the country, on how many machine parts have been exempted by government from basic customs duty- 35

On which of the diseasw, A High Level Meeting was  organised  at 73rd session of United Nations General Assembly (UNGA) at New York- Tuberculosis