Interesting; BJP won these states in 2003 but remained unable to won 2004 election

If Congress led opposition thinks that the defeat of BJP in the three crucial states like Madhya Pradesh, Rajasthan and Chhattisgarh is the visa for their comeback in 2019, then they are day dreaming.

Yes, jusr remember that BJP has won all these three states in 2003 but remained unable to make government in center in 2004.

The trends displayed by the voters in the so called semi-final to the Lok Sabha 2019 polls, no doubt it is a set back for BJP eapecially for PM Modi. These states are crucial for the final of 2019 as these atates have hindi heartland states and specially castle of BJP. 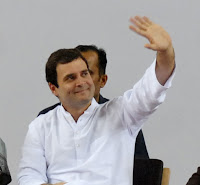 At least Madhya Pradesh, Rajasthan and Chhattisgarh in which the party was ruling for the last one decades.

Trends are showing clearly it is comeback for Congress but is it justified to assume that Rahul Gandhi can won the battle of 2019 with this thrust.

No doubt it is a big boost for Rahul Gandhi who has been waiting for this victory for the last 5 years. Is this justified to conclude that Modi magic has lost it attractions and there is no hope at all for Modi in 2019.