Chandrayaan-2: Lander Vikram, Rover Pragyan-Things You Need to Know about 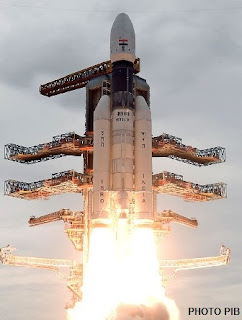 Despite the fact that the much awaited Chandrayaan-2's landing module Vikram went silent just before just landing on the Lunar Surface at the last moment yesterday.

Certainly it has created a despair among the people of India and especially for those ISRO Scientists who have working for the mission tirelessly.

The journty of the Chandrayaan-2's landing module Vikram remained uncertain after a 47 day journey of the mission.

Chandrayaan-2 is India's second mission to the moon. It comprises a fully indigenous Orbiter, Lander (Vikram) and Rover (Pragyan). The Rover Pragyan is housed inside Vikram lander.
Weight of Chandrayaan-2 spacecraft is 3840 kg.

Chandrayaan-2 is India's second mission to the moon. It comprises a fully indigenous Orbiter, Lander (Vikram) and Rover (Pragyan). The Rover Pragyan is housed inside Vikram lander.

GSLV Mk III is a three-stage launch vehicle developed by ISRO. The vehicle has two solid strap-ons, a core liquid booster and a cryogenic upper stage.

The vehicle is designed to carry 4 ton class of satellites into Geosynchronous Transfer Orbit (GTO) or about 10 tons to Low Earth Orbit (LEO).

The lander will separate from the Orbiter and enters into a 100 km X 30 km orbit around the Moon and it will perform a series of complex braking manoeuvers to soft land in the South polar region of the Moon on September 7, 2019.

A total number of 7500 visitors witnessed the launch live from the Viewer’s Gallery at Sriharikota.