India-France Joint Statement: Watch These MoUs in Defence, Education, Culture and Other Areas

0 Current-Affairs, In-News
A+ A-
Print Email 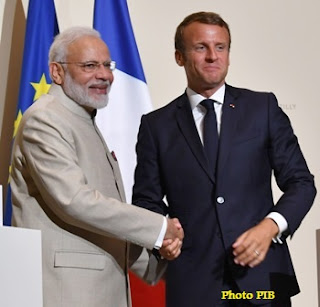 India-France Joint Statement: Indian Prime Minister of India, Mr Narendra Modi with President of the French Republic, Mr Emmanuel Macron have discussed the Bilateral Summit on 22nd and 23rd August 2019 in Paris. Both of leaders have finalized major milestones in the field of these areas including Defense Education, Space and other fields. Just give a look which are in simple and One Linear forms for your knowledge.

Leaders also participated in the G7 Summit, on 25th and 26th August 2019, in Biarritz, under the French presidency of the G7.

Here are the Brief Facts of India-France Joint Statement

France and India thus welcome the decision to train medical support personnel for Indian astronauts, who will be part of India’s manned space mission by 2022.

In Space Field
Both countries agreed for the launch of a Space Climate Observatory that further enhances Indo-French cooperation on combating climate change, besides TRISHNA joint mission and accommodating Argos in Oceansat 3.

Progress in negotiations between NPCIL and EDF since the conclusion of the Industrial Way Forward Agreement in 2018 for the construction of six nuclear power reactors in India in- Jaitapur, Maharashtra.

Hailing the success of the 2019 editions of the Varuna naval and the Garuda air exercises, as well as the preparations for the Shakti exercise, which will be held in autumn in India, Agreement signed for the Provision of Reciprocal Logistics Support for manifestation of this endeavour.

Progress made in the implementation of agreements signed for particularly the delivery of the first Rafale combat aircraft from this year.

India will be the Country of Honour for the 2020 edition of Livre Paris, the Paris international book fair.

The Musée national d’art moderne (Centre Georges Pompidou) will hold a dedicated exhibition of the works of Indian artist Sayed Haider Raza in 2021.

Education Sector
Both Sides expressed satisfaction on the status of student mobility between the two countries, which is target of 10,000 set in 2018 will be fulfilled this year itself and therefore both sides decided to enhance the target to 20,000 students by 2025.

Agreed to hold the Second Knowledge Summit in Lyon, France, in October 2019.

Climate Change
India and France, under European Union, will develop by 2020 their long-term strategies for low-GHG emission development, taking into account their Common but Differentiated Responsibilities and Respective Capabilities, in light of different national circumstances, and reflecting the highest possible level of national ambition, in line with Paris Agreement.

On Terrorism
Both the countries called upon all countries to work together for rooting out terrorist safe havens and infrastructure, disrupting terrorist networks and their financing channels, and halting cross-border movement of terrorists belonging to Al Qaeda, Daesh/ISIS, Jaish-e-Mohammed, Hizbul Mujahideen, Lashkar-e-Tayabba, and their affiliates as well as terrorist groups threatening peace and security in South Asia and the Sahel region.

The leaders also agreed to work together on early adoption of the Comprehensive Convention on International Terrorism (CCIT) in the UN.

For the implementation of the White Shipping agreement, India and France welcome the appointment of a French liaison officer at the Information Fusion Centre – Indian Ocean Region (IFC-IOR) in Gurugram.