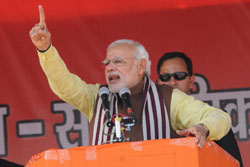 Prime Minister Narendra Modi has said that in the 50 years, BJP has emerged as the greatest party of the country. He further said that the  fifty years back Pandit Dindayal Upadhyay had become the head of the Bharatiya Sangh here. PM was addressing a rally in the Kozhikode today.

Discussing the presence and enthusiasm of people in the city, PM Modi said that “There is  not a human chain but a human wall when i reached here. It was  Fifty years back when  Pandit Dindayal Upadhyay had become the head of the Bharatiya Sangh here and now  BJP has emerged as the greatest party of the country.
Prime Minister, Shri Narendra Modi addressing people in Gujarat

PM Modi discussed about the issue of terrorism and said that efforts of the BSF or the CRPF to keep the terrorists in check are not just because of good weapons but also your prayers. PM also mentioned the issue of Balochistan and Sindh  which has become a hot topic between the two countries. PM  asks Pakistanis to think about whether things are right in the two areas.

Arun Jaitley: Biography and Journey of the Troubleshooter of BJP
He said that leaders are making them  fools in the name of Kashmir, He asked, “ Is  PoK is with you now? Is Bangladesh or Sindh with you now? What about Balochistan,  is with you? PM said that the fact is that but are things right there?
Manohar Parrikar:The Man of Simplicity in the Modern Politics

Modi said that the time will come when Pakistan citizens will take to the streets against terrorism.